RECOMMENDED LISTS FOR COMBINING PEAS AND SPRING AND WINTER BEANS

Stephen Belcher, PGRO Principal Technical Officer, comments on the 2015/16 trials season and on the newly-announced 2017 Recommended Lists: "Something that may or does change is a dictionary definition of variable, and it is a word that has been used more than once to describe the 2016 season and data obtained from trials. Recommended Lists are based on variable data, and while individual trials may exhibit low variability, when combined to produce a 5-year data set variability creeps in. Trials are grown in different seasons, geographic locations, soil types and weather conditions, all of which introduces variability.

"This was seen in 2015/16 when a mild and wet winter period in 2015 was followed by an unremarkable spring 2016 with temperatures and rainfall close to average. The summer months were generally cool with average amounts of rainfall, but with some localised heavy storms. The hot weekend of 18-20 July curtailed flowering and sunshine levels were lower than normal."

Overall 2016 trial yields (3.79t/ha) were well down on the 5-year (4.81t/ha) average. Five trials went through to harvest. Yields were generally lower than in 2015, but the trial near Harwich bucked the trend and gave the highest yields at 5.16t/ha. Trials varied greatly in the degree of lodging that occurred and were greatly influenced by bursts of heavy rainfall.

White peas
Karpate a new white-seeded pea from Senova joins the RL with a P1 recommendation as the top yielding variety with a yield of 105% of controls. Kareni, top yielder in 2015 moves to 2nd year of provisional recommendation. Salamanca, Mascara and Gregor remain fully recommended.

Small blue peas
The small blue category makes a re-appearance on the RL with the addition of Greenwood (IAR Agrii) with a P1 recommendation. Yields are 6% lower than Prophet, but while seed is smaller it is on the large side for a small blue. Standing ability rates at only 4, similar to Crackerjack. 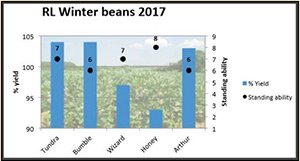 Several candidate varieties were withdrawn from RL consideration by the breeders, so there were no new additions to the RL. Clipper was also withdrawn.

In the pale hilum category, Tundra, Wizard and Honey remain as fully recommended varieties. Bumble moves from P1 to P2 recommendation and joins Tundra as the top yielding pale hilum types at 104% of controls.

In the black hilum (feed) category Arthur was moved to the becoming outclassed category.

Pale hilum types Vertigo, Fanfare, Fury, Fuego and Boxer all remain as fully recommended varieties. New to the RL with a P1 recommendation is LG Cartouche (Limagrain UK). Yields were just 1% lower than the best, but it only has a 4 (same as Fuego) rating for downy mildew resistance.

Lynx moves from P1 to P2 recommendation and joins Vertigo as the top yielding varieties. As in 2015 it has maintained a 7 rating for downy mildew resistance, the best amongst the pale hilum types.

Pyramid and Bablyon were removed from the RL.