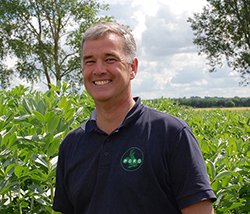 PGRO is pleased to announce that, as part of a wider European consortium led by the James Hutton Institute, they have been successful in receiving support from the European Union's Horizon 2020 research programme.

Roger Vickers, Chief Executive of PGRO commented:
"We are pleased to be appointed to a major role in the TRUE project (TRansition paths to sUstainable legume based systems in Europe). Our involvement will be heavily focused upon facilitating knowledge exchange and communication. The main aim of TRUE is to identify and enable mechanisms for the increased adoption of successful legume-supported production systems, feed and food chains."

Full details of the project ...

Mr Vickers explains that In order to better inform policy decisions, the EU gathers information and advice by commissioning research, hence in October 2015 a call for research projects was issued under the banner 'Sustainable food security (sfs), resilient and resource-efficient value chains.'

As a result of this, a 24-strong consortium put together a €5 million bid for funding through the work programme SFS-26-2016: 'Legumes - transition paths to sustainable legume-based farming systems and agri-feed and food chains.'

The TRUE project consortium involves citizens and businesses operating in legume commodity production and processing, and it is underpinned by excellence in the natural and social sciences and humanities.

Legume cropping is perceived at governing level to have a large number of significant economic, environmental and social benefits and should be encouraged more widely and extensively. Despite this, and the well-known agronomic benefits to growers, legume cropping in the UK - and EU in general - remains very much a minor crop sector compared to cereals and oilseeds.

To better understand the problem, and in order to put in place policies that can better facilitate a change to wider legume production, the EU has commissioned collaborative research partnerships to research the existing barriers to increased legume based production systems. In the process of the research, a consultation exercise will be undertaken EU-wide to more fully appreciate the issues faced by the myriad of stakeholders throughout the industry supply chains.

TRUE is a wide-ranging study involving diverse partners, and the case studies it embodies will optimise diversity and resilience in commercial and environmental terms throughout the supply chain, deliver excellent nutrition, and ensure the highest possible states of health and wellbeing for people and animals.

Over four years the study will use a series of 15 farm networks and 7 supply chain focused innovation case studies.

Regional groups will seek input, and during the 4-year life of the TRUE project, will hold a series of meetings at which stakeholders and interested parties will be invited to contribute towards the direction of the research and receive feedback.

Input and interaction with the project through these regional groups will be welcomed throughout the duration of the project and can be considered a valuable opportunity to guide potential agricultural policy for the future.

Data to validate the current situation will be gathered from a range of sources including, current and recent research and Industry knowledge and experience, and a wide and varied range of industry case studies will be used to generate new data, explore alternatives and potential opportunities.

The TRUE project studies will characterise key mechanisms and associated ecosystem service indicators (see footnote 2). Using the lessons learned, these will lead to recommendations to empower the production of popular and novel legume-based products, on the basis of improved market awareness, understanding and capabilities (including short supply chains).

The findings of the research will present options for consideration, generally outlining, cause and effect, costs and benefits. Decision Support Tools will be created to optimise legume supported systems, identifying those which are profitable from production through to the markets, processors and consumers.

The project envisages that there will be a number of practical innovations across the supply chain – from the fabrication of new precision agriculture equipment to food technologies for improved feed and food formulation. It will also advise on policy amendments that would stimulate the uptake of new farming, processing, manufacturing and retailing practices.