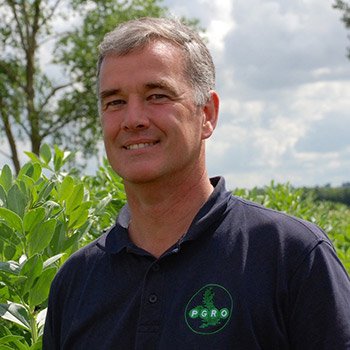 “Pulse crops offer positive potential for environmental good and long-term sustainability through increased production,” asserts Roger Vickers, Chief Executive of PGRO. “We are pressing for policies to encourage pulse production to bring significant benefits to the environment and society as a whole.”

The evidence concerning pulse and vegetable legumes crops and the environment shows clear benefits from their inclusion in farming rotations - benefits that are widely recognised by scientific researchers, environmental groups and agronomists worldwide.

Diversity in the natural environment is enhanced by diversity in the cropping environment and the use of a wider crop rotation. Pulse crops vary from cereal and oilseed crops so widely grown in the UK in their requirements for nutrients and also have differing water use efficiencies.

In addition, growing a wider range of crops –including pulses - encourages diverse habitats and feeding opportunities for wildlife, both above and below ground.

Leguminous crops require no artificial nitrogen fertiliser thereby decreasing both the environmental damage from its use and the enormous energy consumption and greenhouse gas generation in its production.

Being highly symbiotic with soil microflora, pulse crops increase biodiversity, resulting in an enhanced and more fertile soil condition and ensuring that subsequent crops perform better after pulses have been grown.

Numerous studies have confirmed the positive benefits of beans and peas to pollinators, insects and birds, again increasing biodiversity and making their production highly compatible and beneficial with wilding measures for crop perimeters.

Water and land use efficiency is significantly greater when producing vegetable rather than animal protein.

“With brexit about to bring major changes in all aspects of UK agriculture, we believe this is a perfect time to promote pulse crops as offering opportunities for improving the environment on a wider scale,” adds Mr Vickers.

Note for Editors: Processors and Growers Research Organisation (PGRO) is the non statutory levy body which promotes and carries out research and development in peas and beans. PGRO growing guides and recommended lists of varieties are the national references for growers. The PGRO publishes 'The Pulse Magazine' quarterly, the 'Pulse Agronomy App’ on its website (www.pgro.org), issues bulletins during the growing season, provides education and training courses, and runs grower/agronomist meetings around the UK.