O. crenata is a parasitic herb that can occur on several legumes and some umbelliferae in cultivated fields and occasionally in gardens. Native to the Mediterranean region, S.W. Asia and eastwards to Iran, it is regarded as a serious problem in Egypt, Jordan, Tunisia, Lebanon and Italy and common in Morocco. There are also reports of serious issues in Spain, Portugal, Israel, Syria, Turkey and Malta. Estimates of loss in infested faba bean vary from 5% in Spain to 20 or even 60% in Morocco. In several states O. crenata is a notifiable pest for which there are strict import controls.

O. crenata was first recorded in Britain in 1845 (W. Gloucs.). It was known at one site in S. Essex from 1974 until 1983 and in 2013 has been found and positively identified in a small area of Kent on both winter and spring beans.

O. crenata produces leafless flowering stems, up to 100 cm high, usually un-branched. As the plant is a parasite it completely lacks any chlorophyll, deriving its energy from the host plant. The base of the stem, below ground, is normally swollen and tuberous. The inflorescence, occupying up to half the length of the stems carries many orchid like flowers, arranged in spikes. The fragrant flowers can be pale purple or white with distinct lilac veins. Each flower can develop a capsule which may contain several hundred seeds, each about 0.2 x 0.4 mm. A single plant carries ten to several hundred flowers and may produce up to a quarter of a million seeds. Early vegetative phase of O. crenata established on root at base of the bean plant

Biology
O. crenata is an obligate parasite, needing to establish a connection to a host root within a few days of germination. The seed is very small and the radicle which emerges can only grow a few millimetres. Chemical stimuli are needed to trigger germination and these normally come from root exudates of a host plant. Orobanche usually only germinates when a host plant root is in close proximity. ‘Conditioning’ of the mature seed in a moist environment and suitable temperatures for several days is required before it is responsive to germination stimulants. (O. crenata seed does not germinate below 8°C). Conditioned seeds remain receptive to germination stimulants for several months but their responsiveness fades gradually as the seeds dry back. They then remain dormant until re-conditioned. It is believed that seeds may remain viable in their dormant state for many years awaiting the coincidence of these specific germination requirements. 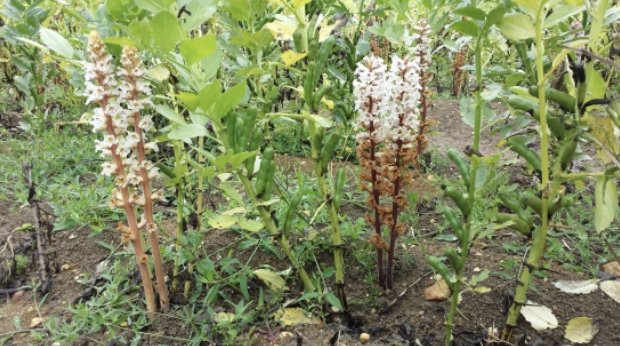 Symptoms of the presence of O. crenata may not be apparent until after emergence of the parasite, a reduction in pod setting and seed development is certain and may be serious. The bean plants may wilt and in severe cases even collapse

Origins of infection in the UK
The origin of the 2013 infection in the UK is unknown and despite the attention of numerous experts (PGRO, Rothamsted, The Natural History Museum botany identification service, FERA’s plant health department and parasitic weed experts from several academic institutions), identification of the original source is proving difficult and may be inconclusive. The longevity of O. crenata seed means that any infestation of the soil may have been months or years before the right conditioning took place in conjunction with the presence of a suitable host legume. The seed is so small that there is the possibility it could be imported as an impurity on seed of any legume from an infected area.

The team monitoring the incidence in Kent is advising on the options going forward to minimise the impact and contain the problem locally.

Management and control
There is no single effective management technique. The main approaches involve:

Cultural measures: Cultural control techniques should be used in combination as no single method will have maximum effect.

Trap cropping
Trap crops are plants which stimulate the germination of parasitic weed seeds but do not get infected by them, reducing the soil seed bank. Reduction in infestation levels is thought to be between 10 and 40% effective in one year. 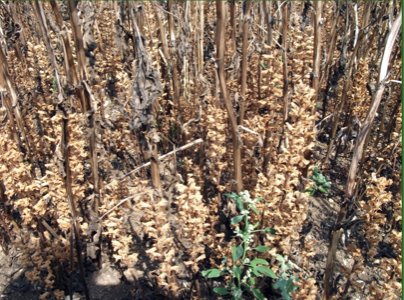 O. crenata on field beans browning off as seed is set

Chemical control
There is chemistry available which can contribute to the control of Orobanche but it needs to be used in conjunction with cultural techniques described to deliver acceptable results. The chemistry referred to is generally not available in the UK.