To reduce the risk of a build-up of persistent soil-borne diseases such as foot rots caused by Fusarium solani, Aphanomyces euteiches and Didymella pinodella, peas should be grown in no more than one year in five on the same field. There is limited information on whether the same pathogen strains can infect other legume crops. Recent cover crop work has shown that winter vetches and Berseem clover do not increase the risk of foot rot infection when grown as cover crops preceding vining peas. Published reports suggest that pathogen strains might be host plant specific but not enough information is available to advise whether field beans and green beans can be grown in closer rotation with peas. As a precaution, it is recommended to leave five years between field beans, broad beans, green beans and peas. (Details of Pea Foot Rots and associated soil tests can be found at the end of this section).

Land is often ploughed in the autumn allowing natural weathering to aid in the production of adequate tilth in the spring with minimal cultivations (stale seedbed). Peas are sensitive to compaction. On lighter soils, spring ploughing is an option where over-wintered stubbles are required. Here, drilling with a cultivator drill on spring ploughed land is popular. In some situations, peas can be successfully established by direct drilling or min-till.

The requirements of peas are small and no N is required.

Where P and K fertiliser is required, it should be put deep enough into the seedbed to allow full utilisation by the crop. Broadcast fertiliser should be ploughed shallow or applied over the furrows. It can then be worked in by subsequent cultivations, but the production of too fine a tilth and compaction must be avoided.

Peas may suffer from sulphur deficiency on soils with low organic matter content, and poor, light-textured soils. High winter rainfall will lead to increased S leaching, and compaction or cool weather may limit root development and restrict S uptake. Tissue analysis should be combined with soil analysis to predict S deficiency as soil analysis alone is not sufficient. Where soil deficiency is suspected, apply 25-35 kg/ha SO3 as a pre-drilling treatment. This can be in the form of magnesium sulphate, calcium sulphate, potassium sulphate or elemental sulphur. 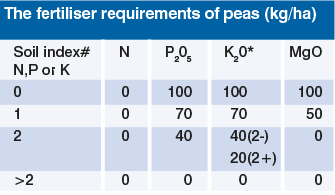 KEY
#According to soil analysis on the ADAS classification: 0 = very low, 1 = low, 2 = medium, >2 = high
*Not more than 50 kg/ha K20 should be combine-drilled, otherwise germination may be affected. The rest should be broadcast.

The benefits of early drilling can include higher yield, earlier maturity and some escape from pests. However, it is more important to drill peas when soils are drier and less prone to compaction.

Peas sown in rows wider apart than 20 cm may give lower yields. Narrower rows result in higher yields and tend to give more even crops, easier combining and better competition with weeds. An adequate plant population is essential since low populations are more difficult to harvest, later maturing and more prone to bird damage.

Most cereal drills are suitable for peas. The drill should be accurately calibrated for each seed lot before sowing. Seeds should be sown so that they are covered by at least 3 cm of settled soil after rolling. On most soil types it is necessary to roll the field to depress stones in order to avoid damage to the combine, and for effective pre-emergence weed control. Rolling should be done soon after sowing, but prior to the application of pre-emergence herbicide application and well before emergence.

Foot rot diseases in peas are caused by a complex of soil borne pathogens. The most common pathogens are Fusarium solani, Didymella pinodella and Aphanomyces euteiches. These pathogens can occur individually or in combination, and yield losses can be severe.

Development of foot rot diseases is encouraged by poor soil structure, compaction and water logging. All three pathogens produce long-lasting resting spores which survive in soils for more than ten years. Frequent legume cropping leads to the build-up of pathogen levels in soils. Work has shown that some degree of yield loss can even occur where relatively low levels of pathogens are present, and the above ground symptoms of the disease may not be obvious.

All pathogens are reported separately. Scores and associated risk levels (likelihood of disease development) can be found in the table below.

An overall risk level for the field considering all three pathogen loadings is also provided.

Soil samples should be collected at the latest in autumn before pea planting. Test results will also be valid for soils tested up to 2 years in advance of planting peas due to the long-lasting nature of the pathogen spores. Occasionally, soil samples may have to be taken from fields containing standing crops such as sugar beet. In these cases, soil from the surface should be discarded as some residual herbicides can affect the result.

Test results will be provided 4 weeks after receiving of soils

Soils are heterogeneous and populations of soil microbes vary with soil depth and type so it is important to realise that a single sample is unlikely to be representative of the whole site. Soil pathogens, in particular, can occur in patches across a field. Whilst separately testing each sample collected is the ideal method of checking it, the cost is prohibitive, so representative composite samples are created by collecting a number of smaller samples from the area and combining them.

The frequency and distribution of soil collection for the composite sample is important. The more sub samples the better. If a specific issue is occurring in a restricted area, then samples might be collected from that area alone. If the entire site is to be assessed, then a sample representative of the entire site should be collated.

Soil should be taken from the rhizosphere (the root zone), the area within the soil profile that will have the most microbes. This means discarding the top 5 cm of soil, generally sampling to a depth of 25 cm. To ensure representation of the entire site a random or grid sampling strategy should be adopted.

For random sampling, choose random points to sample across the entire field.

For grid sampling, take samples at regular fixed intervals across the area. This method is typically used where little is known about the field in question.