To improve the agronomy of Lupins in the UK, and provide a high quality component for livestock feed to reduce dependence on imported ingredients such as soya, the project ‘An Integrated Program for the Development of Lupins as a Sustainable Protein Source for UK Agriculture and Aquaculture’ (LUKAA) was created. This was a joint initiative co-funded by the Sustainable Agri-Food Innovation Platform with industrial support from a consortium of food producers and research organisations. 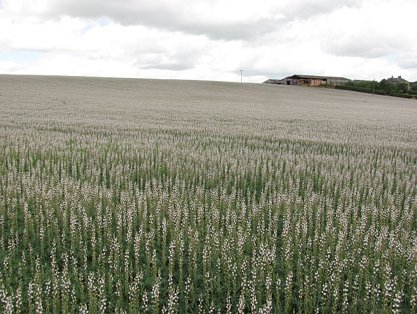 Lupins offer growers a pulse crop with significantly higher protein content than peas or beans but certain varieties can be later maturing, or sensitive to alkaline soils. There are currently three species of the lupin (Lupinus) family available in the UK, the white lupin (L. albus), the narrow leaved or blue lupin (L. angustifolius) and the yellow lupin (L. luteus).

Spring varieties are available of all three types, but the plant architecture varies between types and varieties. A number of blue and yellow lupins are sensitive to alkaline soils and a pH of 7.0 or less is ideal. White lupins are more tolerant of alkaline conditions, growing well at pH 7.5. In the UK lupins are used for crimping, ensiling and grain production.

Lupin seed should be tested for germination and anthracnose disease (Colletotrichum gloeosporioides or C. acutatum). It is vital to ensure only seed free from anthracnose infection is used. White and Yellow lupins may also be tested for Bean Yellow Mosaic Virus (although this is currently rare in the UK). Blue lupins tend not to carry the virus in the seed as infected plants tend to die before seed is set. There are no seed treatments available for use in lupins.
Seed is planted with an inoculant to aid nodulation. The inoculant should be mixed with the seed before drilling, unless the seed has been pre-treated.

Lupins are sensitive to soil compaction and sites should be selected accordingly. Lupins should be planted no deeper than 50mm. It is recommended that a drilling depth of 30-40mm is used and efforts should be made to place Lupins into a good tilth and retain seedbed moisture. Rolling may be necessary depending on soil type.
Yellow and blue lupins prefer light acid or neutral soils, whilst white Lupins will grow well up to about pH 7.5, and will tolerate slightly heavier soils.

While actual seed rates will vary depending on grain weight, germination and expected losses, the following may be considered as typical guideline targets (subject to any additional specific guidance from seed suppliers):

Limited information from the LISA and LUKAA projects has suggested that for blue and yellow lupin types, seed rates of 125-150 seed /m2 can increase yield potential and improve weed suppression in some situations (but will also increase seed costs).

Limited research suggests that lupins can accommodate wider row production (possibly up to 50 cm) which could also allow for the adoption of inter-row weeding.

Seed is supplied with an inoculant containing Rhizobium bacteria (Bradyrhizobium lupini), for nodulation. The inoculant is sometimes supplied separately and is mixed with the seed immediately before drilling. However, most lupin seed is now supplied pre-inoculated which offers greater convenience for the grower. Growers are advised to ensure they use a separate inoculant if the seed is not already pre- inoculated. Failure to use an inoculant can mean a significant reduction in the amount of nitrogen fixed by the crop. Lupins do not require any additional nitrogen applications.
Lupins will remove about 40-60kg/ha phosphate, 40-60kg/ ha potash and 20-40kg/ha sulphate and soils should be kept at suitable maintenance levels across the rotation.

Sulphur requirement is likely to be similar to that of other pulse crops in the rotation.

There is evidence that some soil-borne root rot pathogens which cause disease in lupins may also affect peas, field beans and to a mild extent vetch. Root and foot rots are caused by a complex of fungal pathogens. For this reason it is advisable to regard these legume species as the same crop when planning rotations.

Lupins are known to be hosts of Sclerotinia sclerotiorum, and the disease can infect stems and pods in some crops (although this is currently rare). Whilst not generally greatly problematic in lupins this disease should be considered when planning rotations with other host crops.

Lupins will fix nitrogen, thus providing a benefit to the following crop. The DEFRA Link project (Lupins in Sustainable Agriculture) demonstrated that in organic crops there was a 0.5 t/ha response in rye grown following yellow lupins compared to following spring beans.

Spring sown break crops in general can provide useful opportunities to manage problem weeds (e.g. various grass weeds including black-grass). Spring crops reduce the density of key weed species that germinate in the crop (compared to autumn sown crops). They also provide an opportunity in the autumn and early spring to effectively use cultivation and non-selective herbicide applications ahead of sowing.
When sowing lupins, the use of a stale seedbed technique ahead of establishment is essential where specific weed problems are known to be present.

Herbicide availability in the crop relies on a number of existing Specific Off-Label Approvals (SOLAs) and their replacement EAMUs with an emphasis on effective pre-emergence applications. Further research is examining additional grass and broad-leaved weed options and growers should check for any new EAMUs.

Herbicide programmes should typically be based around pre-emergence Stomp (pendimethalin). Products such as Avadex (tri-allate) or Gamit (clomazone (in the white lupin species only)) can be used to augment Stomp.

Post-emergence grass weed herbicides are currently limited to a number of the ACCase family of herbicides where resistance is known to occur in a number of grass species so their effectiveness will vary. There are currently off-label approvals for Fusilade Max (fluazifop-P-butyl), Laser (cycloxydim), and Falcon (propaquizafop).

Post-emergence broad-leaved weed control has been problematic for many years. However, Lentagran (pyridate) has recently been granted an EAMU for use in yellow lupins; this may be extended to all types of lupins in the future. While UK field experience is limited in lupins, Lentagran will have activity on a range of broad-leaved weeds.

Lupins are susceptible to anthracnose (C. gloeosporoides or C. acutatum) which is a common seed-borne disease in countries with humid summers, and can cause almost total crop loss when infection is severe and left untreated. This disease can spread rapidly from plant to plant and field to field by wind, rain and soil-borne spores, and on contaminated clothing and equipment. Over time, one infected plant can spread disease many metres to neighbouring plants under warm damp conditions. Complete crop loss is possible from a low initial level of seed infection if conditions are conducive.

Plants may show symptoms at any time from seedling emergence, although severe symptoms may develop later in the season. Plants develop large lesions which may cause twisting, particularly when petioles are affected. Multiple lesions can sometimes cause a corkscrew appearance. Plants usually develop a single large lesion on the stem, which causes a characteristic crook–shape as well as twisting of the stem. Plants appear to have ‘rubbery’ stems which are incapable of holding the plant upright, hence the crook shape. Pink or orange spores develop in the lesion on the inside of the crook, and these are spread to surrounding plants by rain-splash. The disease is most commonly found in white lupins, although it can affect all three types of lupin. Anthracnose can be effectively controlled with fungicide applications. Identification of the disease is clear and easy.

Blue and yellow lupins very occasionally get anthracnose but it is quite rare. They are also susceptible to fusarium, stemphylium grey leaf spot, pleiochaeta brown spot and botrytis, but these occur late in the season and are quite unusual.
Products used in-field for a range of diseases including Anthracnose:

Bean seed fly (Delia platura) can cause significant plant losses to later sown crops (May), particularly in the presence of partially rotted organic matter, or recently cultivated green weed cover. Earlier sowing and good weed control prior to drilling will reduce problems caused by bean seed fly. There are no chemical means to control the pest.

Leatherjackets have been known to cause significant damage and this should be considered when ploughing grassland for lupin cultivation.
Aphids are rarely a problem in lupins, although they occasionally suffer from attacks by Myzus persicae, peach potato aphid. Bean Yellow Mosaic Virus may be transmitted by aphids, but due to the general lack of aphid vectors, transmission is usually insignificant.

Pea and bean weevil (Sitona lineatus) may cause minor damage to lupins.