Navy (or haricot) beans are the raw material used for baked beans, as well as fresh market use, and are mostly imported. They belong to the same species as green beans (Phaseolus vulgaris) and have many aspects of husbandry in common.

Navy beans must be considered as occupying the same position in the rotation as other large-seeded legumes such as dwarf green beans, broad beans, peas, field beans and lupins. No field should be sown to any of this group of crops more frequently than once in five years. 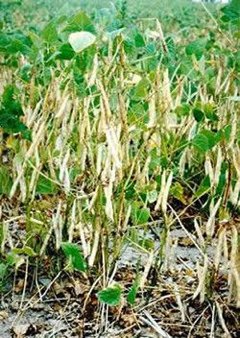 Like green bean seed, navy beans are very fragile and must always be handled gently. The use of high quality seed will help ensure an optimum population of healthy seedlings.

Rhizobium phaseoli which nodulate and fix nitrogen for phaseolus beans are absent from most UK soils, hence an inoculant is advisable.

In addition, an application of nitrogen fertiliser may be needed. Response to nitrogen in phaseolus beans is good but they respond less well to phosphates, and response to potash is variable.

The table below gives fertiliser recommendations:

Note: 1. A small amount of nitrogen may be needed if soil nitrogen levels are low in the 0-30cm of soil. Deduct nutrients applied as organic manures

The total quantity of fertiliser should normally be applied as a base dressing, since experiments have shown little advantage in dividing it between base and top dressing. However, top dressing should be considered if a crop shows signs of nitrogen deficiency during growth and 25 kg/ha may be advantageous if rain or irrigation can be relied upon to move nitrogen into the root zone. In this case 25 kg/ha could be applied at flowering time and the level of nitrogen in the basal fertiliser reduced.

Navy beans require high temperatures for optimum plant development and early harvesting. This is most likely to be in parts of England where the mean minimum temperature in June is above 10°C and the average rainfall in September is below 75 mm

The crop will perform best in the warmest areas of the country such as the south coast, from Bournemouth to Eastbourne, most of the low-lying areas of Kent, and parts of Surrey, Essex and Suffolk. Localised areas in other parts of southern England may be suitable if the mean minimum temperature in June is above 10°C and the average rainfall in September is below 75 mm.

Navy beans are susceptible to frost and it is important that average soil temperature exceeds 10°C. This is usually from the beginning of May. Sowings made after 25th May can suffer from delayed harvest and reduced yields. Warm temperatures are required for optimum growth and harvesting is often not until late September/October.

Phaseolus beans are sensitive to soil conditions and ideally they should be grown in loamy soils of good texture which contain ample organic matter. Over-consolidation and capping must be avoided.

The seed should be sown 2.5 – 4 cm deep but it is important that it is sown into moist soil. Bean seed is fragile and seed damage by drills should be avoided. Precision sowing with belt-feed or pneumatic drills is ideal.
The soil surface should be as level as possible to facilitate ease of harvest. Rolling is helpful and depresses stones.

Navy beans have a similar response to row width and plant density as green beans. They produce maximum yields at narrow row width and a 14 cm width may be optimum, but the row width for precision drills is about 30 cm. Optimum plant population is 40 plants per square metre.

The seed rate required to achieve the desired population can be calculated using information on thousand seed weight (TSW), percentage germination and likely seedbed losses (usually estimated at 10%) as follows:

The crop has a longer growing period than green beans and towards harvest, when the canopy declines, late weeds can become a problem. The effectiveness of residual herbicides may be reduced if sown in dry conditions.

There are extensions of approval for minor uses (EAMU) for the use of several pendimethalin products along with Dual Gold (s-metolachlor) as pre-emergence treatments. These give useful control of several species under favourable conditions.

Bentazone (Basagran SG and others) is available as a post-emergence treatment. Where weed problems are severe a mineral oil such as Actipron may be added to some bentazone products, but crop damage may be increased. Please check labels carefully. Applications should not be made on hot, sunny days when temperatures are at or above 21°C.

There are several diseases of navy beans, which are favoured by wet weather.

The grey mould fungus (Botrytis cinerea) is encouraged by high humidity, and is generally attracted to damaged or moribund tissue, such as the ends of pods which touch the soil or flower petals which adhere to pods in damp weather. Effective preventative treatment can be made by treating the crop during flowering with a fungicide and repeating the application seven days later.

Sclerotinia (Sclerotinia sclerotiorum) can be a very damaging disease when established. Plants may be attacked when young, the stems becoming watery and rotten and covered with a mass of white mycelium. Infected plants may wilt and collapse and hard black sclerotia form within the stems. The sclerotia can remain in the soil for several years, until favourable conditions occur resulting in the production of fruiting bodies which release wind-blown spores. Some control can be achieved when using a fungicide for Botrytis control.

Halo blight (Pseudomonas syringae pv. phaseolicola) is a seed-borne bacterial disease which occasionally occurs but can be avoided by using healthy seed.

In addition, navy beans are subject to several root rotting organisms which can also attack other leguminous crops, especially peas. It is important to minimise the risk of build-up of these diseases by treating all of these crops (green beans, broad beans, field beans etc.) as the same crop, allowing a minimum 4-year legume-free period between them.

Some varieties are susceptible to bean yellow mosaic virus, which causes mottling and veinal necrosis. Growth may be checked and yield reduced. The virus is not seed-borne but is readily transmitted by aphids. If aphids are observed, sprays will help check virus transmission.

Navy beans can also be affected suffering from manganese deficiency. Where symptoms are seen on the foliage, in the form of yellowing between the veins and around the leaf margins, sprays of manganese sulphate will help prevent formation of marsh spot.

Seed can be damaged by bean seed fly (Delia platura) which can cause substantial seedbed losses. Imported seed may be treated with a combined insecticide and fungicide seed treatment. UK produced seed will not be treated, as currently there are no approved insecticidal seed treatments. The flies are attracted to freshly disturbed soil where the remains of green weeds or crop residues are present. Ensure any weed cover is destroyed well before cultivation and drilling.

Silver Y moth caterpillars are an occasional pest and control with products containing lambda- cyhalothrin (EAMU) is recommended before pod damage is noticed.

Heavy infestations of black bean aphids can cause malformation of pods and stunting of plants, especially if colonies develop on the flower buds. Products containing lambda-cyhalothrin should be applied as soon as flower infestation occurs.

Harvesting date will vary with season but is normally in late September. If the crop is weedy a harvest aid product such as glyphosate may be needed. It should not be applied to crops destined to be used for seed.

The moisture content of the seed should be about 40% with most pods at the brown, dry stage and the rest at yellow parchment stage. Most of the leaves should have dropped off and those left should be yellow. Combining should be carried out as soon as weeds have died back and crop is at a suitable stage.

Direct combining is the best method of harvesting where this is possible. This may be difficult in short crops where the soil surface is uneven or cloddy. The optimum time for combining is when moisture content is between 20-25% as pod shatter, seed splitting and damage can occur if the crop is too dry. It is essential to avoid seed-coat contamination by soil and the concave should be clean.

The quality of the sample can be reduced if temperatures are too high - greater than 38°C - or if over drying has happened. Moisture content should not fall below 15% and beans should be stored at 16-17% moisture content with ventilation.

Drying should be carried out slowly at cool temperatures and ventilated bins or driers with fabricated floors are ideal. On-floor drying with above or below-floor ducts can also be used. Where heat is used, for example in continuous flow driers, temperatures should not exceed 38°C and the crop rested for 48 hours between drying.